Entertainment Weekly shared the first promotional photo from the upcoming season of The Flash, featuring a different look at Barry. 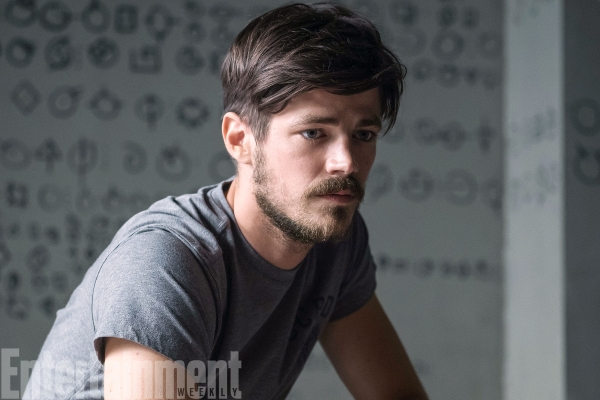 Spoiler alert: It won’t be long before Barry Allen escapes the Speed Force. However, viewers will meet a very different Scarlet Speedster when The Flash returns.

After sacrificing himself to save Central City in the season 3 finale, Barry (Grant Gustin) has spent the last six months in the Speed Force, which has had quite the effect on him — as you can see in the recently released promo.

“Initially, Barry is pretty scrambled when he comes out of the Speed Force,” Gustin tells EW. “He’s not himself, he’s talking nonsense. The way I see it, when he was in the Speed Force, he experienced his whole life laid out in front of him from start to finish. So in some sense, he comes out very wise, kind of knowing everything, but he has no understanding of what he’s seen, so he comes out very jumbled and talking what he thinks makes complete sense, but just nonsense to the rest of the crew.”

Fear not, Barry won’t be like that all season, as executive producer Andrew Kreisberg explains that his time in the Speed Force has actually had a really positive effect on him as well. “The most important thing about Barry this year is that the experience of being in the Speed Force was a bit of a baptism for him. The premiere episode is called ‘The Flash Reborn’ and Barry, in a way, has been born again,” Kreisberg says, noting that the title doesn’t mean the show is following the The Flash: Rebirth story line from the comics. “His experience in there has really washed away a lot of his sins and cleansed him of a lot of his doubts, his fears, and his guilts, and it really is leaving him free and clear to just have an open road and a fresh start. He really loves being The Flash again.”

Gustin concurs: “A huge weight has been lifted and he’s forgiven himself again of all the mistakes he made the last couple years and people that he’s hurt. He’s ready to move forward with the team and move forward with Iris [Candice Patton] and be happy Barry again and save Central City.”

Barry’s new outlook is part and parcel of the show leaning back into lighter, more comedic tones after traveling down a dark path the last two seasons. “I’m having fun with it, just getting to laugh things off a little bit more again as the character,” Gustin says. “When we see a bad guy that rolls around, a villain of the week, it’s not such a daunting task. We can have a little bit of fun taking down these guys now.”

Barry’s ability to forgive himself is also the next step in the superhero’s evolution. “It’s not in the titles, but every one of these shows — whether it’s Supergirl, Arrow, or Flash — it really is like Arrow Begins, Flash Begins, and Supergirl Begins,” Kreisberg says. “Now it’s season 4 and he’s really become The Flash in the comic books, the one who really is in full mastery of his skills and has the emotional maturity that he has in the comics.”

Inside ‘The Flash’ Season 4: Behind the Scenes